Immanuel Lutheran Congregation was established in 1856 and is the oldest active LCMS church in West Michigan.

In 1857, the congregation built a church on a hillside overlooking the city but quickly outgrew the sanctuary due to the high rate of German/Lutheran immigration into the area. In 1890, the present sanctuary was dedicated. It was built on the same site at a cost of about $35,000 (more than $7,000,000 based on current-dollar indicators for historic buildings). Except for minor repairs and regular maintenance, few alterations have been made to the exterior of the main building. In the fall of 1963, a new organ was installed, and a general restoration program followed in 1965 that involved sandblasting the exterior and a complete remodeling of the interior. The most recent improvements include (i) installation of a new lighting system in 2000, (ii) re-leading of all the stained glass windows in 2001, (iii) installation of an elevator and handicap accessible restroom in 2004, and (iv) rebuilding of the organ and its systems in 2005 and 2007.

Immanuel is a “downtown” church, meaning it is located in the center of Grand Rapids’ business and medical district. From 1890 through the 1950’s, Immanuel was a typical neighborhood church with many of its members living in close proximity. As the 1960’s and 1970’s brought urban blight and flight, many downtown churches of other denominations left the downtown area. It was during this time that Immanuel’s day school joined with another day school operated by St. James Lutheran, to be independently operated as Immanuel-St. James Lutheran School.

Today, Immanuel is truly a metropolitan church, drawing its members from all four quadrants of the greater Grand Rapids area. Access to the church is convenient from all directions as the church lies near the intersection of two Interstate freeways (Int. 196 and U.S. 131) that bisect the city in all four directions.

Fortunately for Immanuel, Grand Rapids’ city fathers were visionaries when it came to historical preservation. In the 1970s, the Grand Rapids Historic Preservation Commission grew out of plans to demolish stately turn-of-the-century neighborhoods near the church in exchange for multi-tenant apartments. Today, the Heritage Hill Historic District is nationally recognized for its blocks of beautifully restored 100-year old homes overlooking the downtown area.

Since the early 1980s, the downtown area has undergone major growth and revitalization leaving Immanuel on what is arguably the most valuable piece of real estate in the region. When Amway Corp. co-founder Jay Van Andel announced he was founding a world-class medical research center in the mid-1990s, they built the headquarters next door to Immanuel, leading to numerous inquiries and rumors about the imminent sale of the church property.

In 1999, the Congregation took the issue head-on and overwhelmingly decided to remain in its downtown location. The congregation re-cast its vision and ministry, declaring it to be “A Sanctuary for the City” with the goal of “Connecting People to Jesus.” Outreach emphasis has expanded to include the medical community, the business community, nearby residential neighborhoods, and a burgeoning college community.

In 2006, Immanuel celebrated 150 years of ministry in downtown Grand Rapids. For over 150 years, God’s Word has been preached, His sacraments administered, and the cross of Christ held high before Grand Rapids and for all who come to Immanuel to worship Him. With this celebration, Immanuel also finds itself at a crossroads. While efforts have been made, we need to do more to reach out to our neighbors.

Today, nearly all Immanuel members drive by at least one other LCMS church to attend Sunday services — a fact that testifies to our member’s devotion for their congregation. But it also demonstrates that we are not reaching out to our immediate neighbors, especially as new downtown condominiums fill with empty nesters and young professionals who are fleeing the suburbs.

With the monumental changes in our neighborhood over the past 10 years, some have noted that Immanuel has “moved without moving.” Whatever the case, we believe God has placed this congregation in downtown Grand Rapids, and we now pray that He will lead us to adapt our ministry to the needs of this rapidly developing downtown area and medical community. 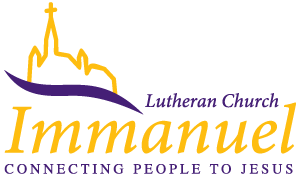